Department of Kazakh language and literature

The head of the department: Doctor of Philosophy (PhD) Gulim Chukenaeva.

The scientific potential of the department is 77%.

Undergraduates and doctoral students have the opportunity to collect, analyze, exchange experiences with researchers, use bibliographic information on the basis of the scientific-practical center “Ilyastanu” and the library named after G. Ormanov.

In the 1990-1991 academic year, the department of Kazakh Philology was established within the Pedagogical Institute named after I. Zhansugurov and began training specialists in the specialty 030740 - Kazakh language and literature.

In 1998, the department of Kazakh Studies and the Kazakh language and teaching methods, Kazakh literature and teaching methods were merged and renamed the department of Kazakh Language and Literature (order № 166p, 30.05.98), until 2002 it was headed by еру Doctor of Philology, Professor K. Kaliaskaruly, from 2002 to 2006,by  the Doctor of Philological sciences, professor T. Sydykov.

From 2009 to 2015 the head of the department was Candidate of Philological Sciences, Associate Professor Kozhagulov Sailau Kazhybekuly.

From the 2015-2016 academic year, the department of Philology and Journalism was reorganized under the name “Kazakh language and literature.”

The work of the methodological group of the department for the 2020-2021 academic year is carried out according to the plan of the Academic Council of the university and the faculty.

In recent years, with the authorship of the faculty department, the following textbooks, teaching materials, and teaching aids have been published:

Information about the scientific work of the department of the Kazakh language and literature for 5 years:

The teaching stuff of the department of Kazakh Language and Literature annually undergo a professional development course in accordance with the plan. For the last 5 years AEO “Nazarbayev Intellectual Schools” Center of Excellence, “Orleu” National Center for Professional Development “JSC, Center for Professional Development and Additional Education of Zhetysu University named after I. Zhansugurov, advanced training courses from scientific and educational centers, training, education – received 105 certificates of advanced training through methodical seminars, participation in trainings, scientific internships in foreign universities.

Research topic of the department: New scientific directions in philology and their applied significance in education within the framework of the program “Rukhani zhangyru”.

Teachers of the department G. Chukenayeva, A. Rakhimova, A. Galimova and doctoral E. Sarzhigitov, Sh, Yeleusizova carry out a research project in the framework of grant funding MES on the topic: “AR08053050-Formation of the linguo-ecological model of education in the Republic of Kazakhstan: theory and practice”.

Monographs, articles based on Scopus, RSCI, recommended by KKSON published by the teaching staff of the Department of Kazakh Language and Literature:

The following articles were published by professors in the journals included in the Scopus database:

The following works were published under the authorship of the teaching staff of the department:

Students majoring in the Kazakh language and literature take an active part in educational activities at the university and faculty.

Educational work with students is carried out in the following areas:

In 2017, the Republic held a scientific and literary conference of university students “Creativity of Beksultan Nurzhekeev” and an educational competition on the work of the writer.

Since January 2018, the department together with the Department of Language Development of Almaty region is implementing a literary project “Literature – the backbone of spirituality.” According to the project, students will meet with representatives of three generations of writers and share their thoughts on their work, the current literary process. According to the project, students met with modern writers Beksultan Nurzhekeevich, Zhumabay Shashtayevich, Gusman Zhandybayev, Zaida Elgondinova, Zhanarbek Ashimzhan, Dauren Kuat, Ainur Toleu, Makpal Mysa, Esey Zhenisovich, Kanat Abulkhair, Roza Seilkhan, Inkarbek Aliya. shared his thoughts on the development of literature.

On October 24, 2018, a literary evening dedicated to the work of the poet Murathan Shokan “I believe in people and I live” was organized.

On September 28, 2019, the library named after G. Ormanov of Zhetysu University named after I. Zhansugurov hosted an open lecture on the topic “The World of Auezov”, dedicated to the birthday of the brilliant writer Mukhtar Auezov.

On October 14, 2019, Zhetysu University named after I. Zhansugurov hosted an open lecture by children’s writer, literary critic, winner of the State Youth Award “Daryn” of the Government of the Republic of Kazakhstan Eldos Toktarbai on the topic “Methodology of modern Literary Studies” for students and undergraduates of the specialty “Kazakh language and literature”.

On November 19, 2019 undergraduates of the specialty “Kazakh language and literature” organized a literary evening of a poet Kasen Gulbahyt who is the author of the book “Alua”, “Flower of Happiness”, “Bird’s wing”.

03.12.2019 the Master’s students organized a festive event ” Independence is my prominence”.

Achievements of students of the specialty in the 2019-2020 academic year:

Student of the PhK-111 group Madet Yernur Expressive reading contest for the 175th anniversary of ” Poetry is the king of words ” — the 1st place;

Student of the group KLL 121 Ashim Aliya fraction “Erudite” – the 1st place in the debate tournament “Zhas Buyn”; nomination “Best speaker” in the inter-faculty debate ” Country of the Great Steppe “; in the city debate ” Life is history, and you are a writer ” – the 2nd place;

Zhamantaev Amanay, student of group KLL 311 ” Religion is the spiritual support of the secular state ” – the 1st place;

The student of the group KLL 411 Marat Elaman is the owner of the rector’s badge of ZhSU.

In the second semester of the 2020-2021 academic year, Damira Kusainova, a third-year student majoring in Kazakh Language and Literature, will study online academic mobility at the University of Niyde named after Omer Khalesdemir (Turkey).

Over the past 5 years, the issue of attracting scientists to teach students on internal and external academic mobility has been addressed.

05.04.-20.04.2016 M.Mamaeva, an Associate Professor of Al-Farabi Kazakh National University, Candidate of Philological Sciences, gave a lecture to students majoring in Kazakh language and literature on the course “Syntax of Simple Sentences” in the framework of academic mobility.

09.04.-21.04.2018 Professor of the Kazakh State Women’s Pedagogical University, Doctor of Philology K. Kalybayeva gave a lecture to the 2nd year students majoring in the Kazakh language and literature on the course “Comparative Grammar of Turkic Languages”.

08.11-14.12.2019 an Associate Professor of the Kazakh National Pedagogical University named after Abai, Ph.D. Kalybayeva K. gave an online lecture on the course “Comparative Grammar of Turkic Languages” for the 2nd year undergraduates majoring in Kazakh language and literature.

In 2016-2017 academic year, Acting Associate Professor, Ph.D. S.Kozhagulov read a lecture at the Kazakh Innovative University of Humanities and Law for students majoring in “Kazakh language and literature.”

7М01701- Information about the scientific internship of undergraduates of the educational program “Kazakh language and literature”.

In addition, cooperation with domestic and foreign universities and research institutes, in particular, the Kazakh State Women’s Pedagogical University, the Institute of Linguistics named after A. Baitursynov, the Institute of Literary Studies and Art named after M. Auezov, the Linguistic and Technical University (Poland), Department of Language Development of Almaty region, etc. concluded agreements with organizations.

For active participation in the propaganda of the program article of the President of the RK N.A. Nazarbayev “Looking into the future: spiritual revival” department received a letter of thanks from the mayor of Taldykorgan. In addition, teachers of the department took an active part in the information and explanatory work of the regional working group “New alphabet – the beginning of a new era” and were awarded letters of thanks from the head of the Department of Almaty language development. Achievements of the educational program “Kazakh language and literature” in the national rating: 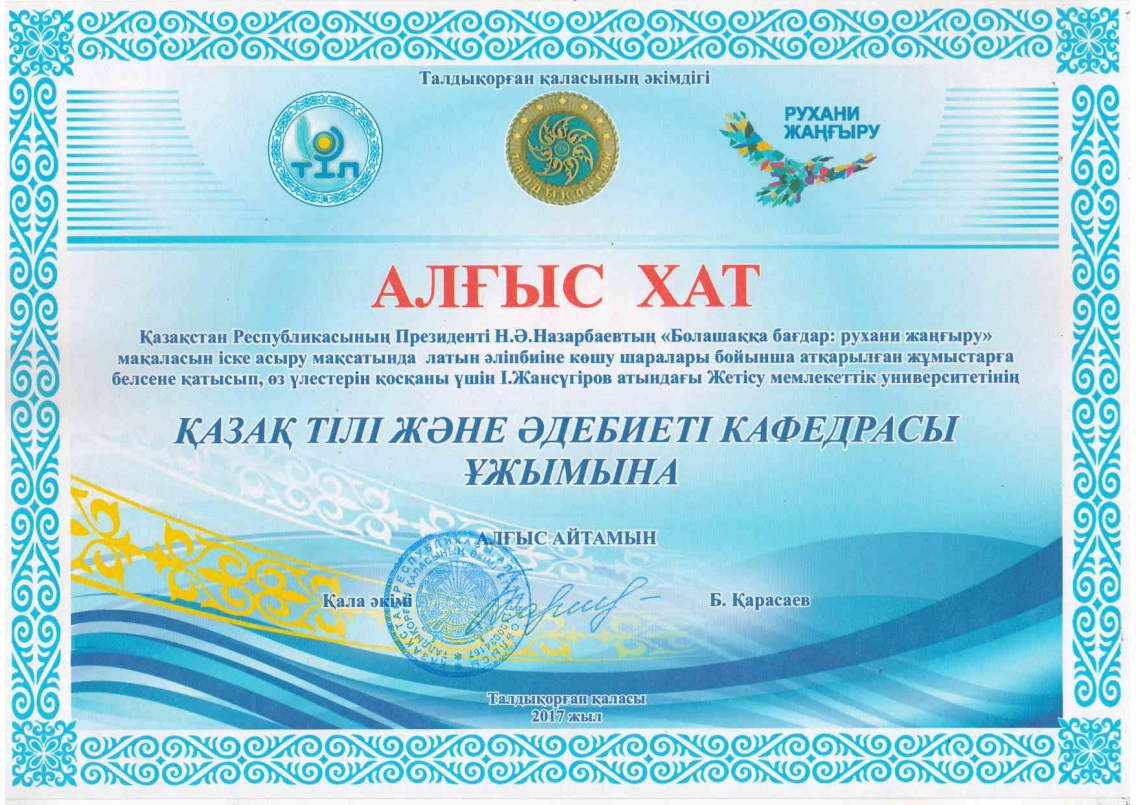 For active participation in the propaganda of the program article of the President of the Republic of Kazakhstan N.A. Nazarbayev “Looking into the future: spiritual revival” the department received a letter of thanks from the Akim of Taldykorgan. In addition, the teachers of the department took an active part in the outreach work "The new alphabet is the beginning of a new era " of the regional working group and were awarded letters of thanks from the head of the Department for the development of languages of the Almaty region.

Since 2016-2017 academic year, the department has dual degree in 6M011700 – “Kazakh language and literature” on the basis of an agreement between two partner universities (rector of the Linguistic and Technical University of Poland Elzhbetta Sternal and rector of Zhetysu State University named after I. Zhansugurov Kuat Baimurzayev). The program is being implemented.

Teacher of the department 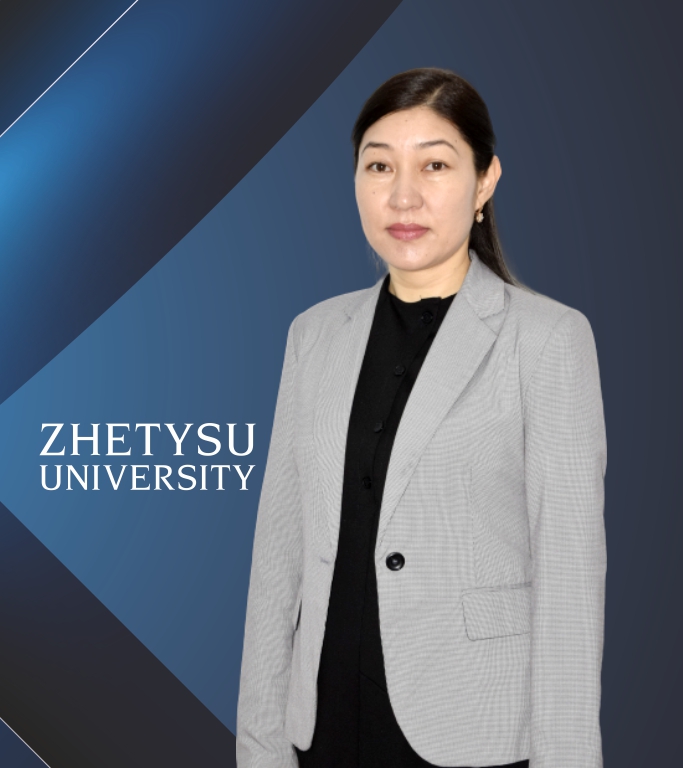 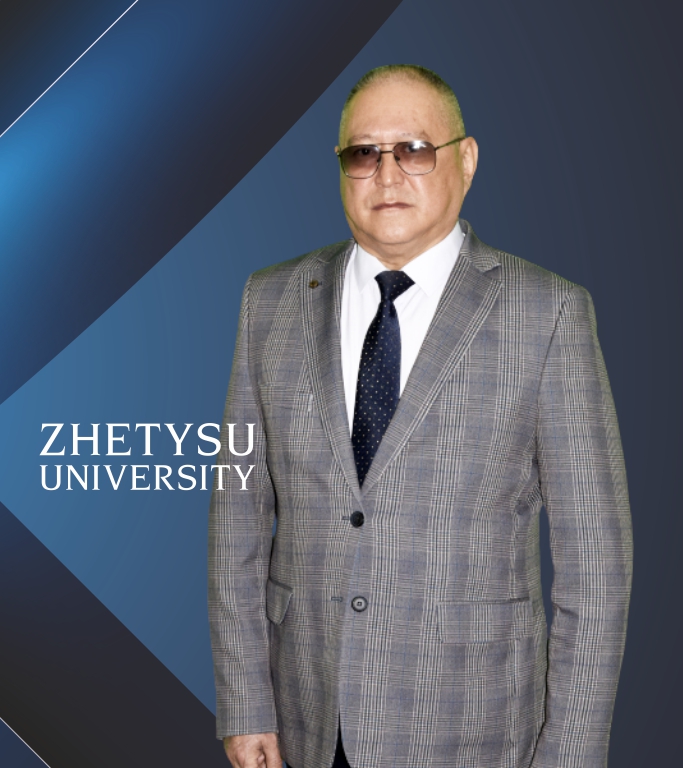 Head of the department, c.ph.s.

Acting Head of the Department of Kazakh Language and Literature 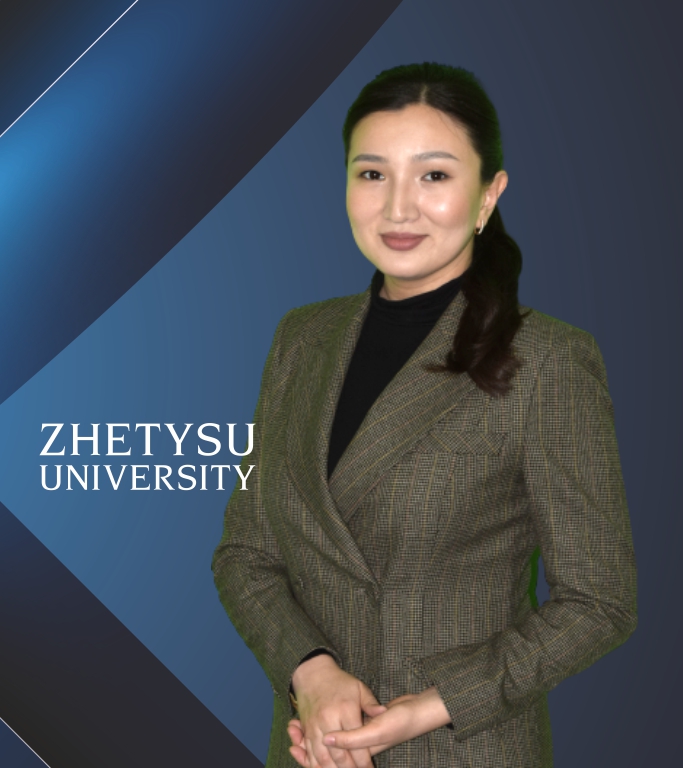 teacher of the Department of Kazakh language and Literature